Hat Trick on the Chattooga

This just in from Nanook of the North...

Our Georgia folks oughta take advantage of the DH program, especially if the Hooch Tailwater is still fishing tough for a few more days until the Lanier turnover is finished.  The Chattooga provided the hat trick yesterday, with a bunch of rainbows, three brooks, and a brown being "fondled". 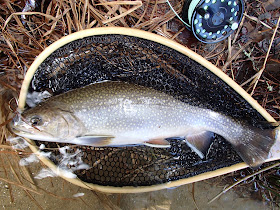 TV weather reports seem to scare off many Georgia  trouters, but they often do not accurately describe the true fishing conditions of our winter waters.  Instead, a) weather radar and hourly forecasts on web weather sites like Intellicast, b) the USGS "Real Time" website's stream gauge data (water temp and flows), and c) good friends at local tackle shops or fishing clubs like TU and NGTO, are much better "strike indicators" to help folks decide whether to burn their time and gas on a trek north.  We seasoned dudes call this "net fishing," as we fish the inter-net the night before we decide which stream, if any to visit. 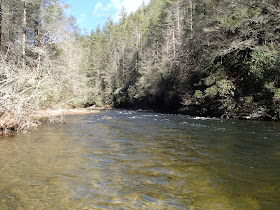 Another important tip:  it's winter fishing season and Georgia trouters should consider adapting their techniques to the season and the higher water flows.  I would encourage anglers to lengthen their leaders (better yet, use straight mono or fluoro) to the maximum length they can handle, and add enough shot to get their offerings down.  The flies need to cut through the water column and scrape along the bottom.  Thick leader butts and midsections are counterproductive at this time of year, as the heavy flows catch that thick stuff and and drag an angler's flies quickly away from the bottom-hugging fish. If anglers still want to use tapered leaders, they should at least add 3-6 feet of 3X to the ends of those 7 or 9-foot leaders, then add their tippet and flies. Tapered leaders aren't needed to cast flies, as the slingshot effects of lead do a fine job!

I've seen this quote in enough fly fishing books and it rings especially true now, as we welcome the new year:
"The difference between a good day fishing and a great day fishing is one more split shot."

My rig yesterday was about 12 feet of 8 pound mono, a large, sliding cork strike indicator (Lightning Strike brand, with hole thru the middle) that was usually within a couple feet of the fly line, 18 inches of 4X to the #10 leech, and 18 inches of 5X from the leech's hook bend to the #18 pheasant tail.  I used one to three removable, size BB split shot above the knot at the 8lb/4X junction.  Shot numbers and indicator location (2X water depth) on the leader were changed to accommodate each pool.   A rubber band or toothpick made the indicator adjustment quick and easy.  An occasional bounce of the indicator told me when I found the "tick-tick" of a good drift along the bottom. And an upstream-lunging indicator told me that a fish agreed!

For new folks, the shallower heads of pools are easier to fish.  They don't require as much leader length, which makes casting easier. I like traditional casting, but I like catching even more.  I'll return to casting around March, when the water warms, the bugs get frisky, and the fish start looking up again.  Right now, I use short casts with roll casts, water loads, and an occasional Belgian backcast (thanks to Hoover Burrell) to put the rig in the water with zero or few false casts and very, very few tangles.

There is no one "right way" to fish, but maybe this method will add to the arsenals of our newest trouters and help them "grip-n-grin" some more this season.  Then they can "pass it on" to the newbies that they meet.   More tips here.

The fish are there.  They are hunkered down, but still hungry.  Georgia trouters oughta put a disposable handwarmer pad on top of their toes, in between two pair of wool socks, slip into their waders, and go get 'em!

Ed. Note:  After this post was published, we had folks asking for a detailed description of how to rig the indicator so we got the full story from "Nanook".  Hope this helps.

"Last year a visiting Michigan steelheader, whom the Guru and I met in the Chattooga parking lot during the holidays, showed us his indicator rigging technique.  Up north, he said that he fished a lot of heavy water with serious bobbers and serious lead, and had to change his indi depths often to get good drifts on plane with chrome noses.  Since he was kind enough to share his indicator technique with us, I'll "pass it on" to ya'll.

"Here we go:
"He first threaded a cork or balsa indicator, with a hole thru its length, onto his leader and slid it up to the start of the leader's thick butt section. Now the indi is on the leader.  It will stay there.
"He then cut a 12-inch piece of strong mono (maybe 2x or 3x) and also threaded that thru the indicator. (If you're counting, this makes two pieces of mono threaded thru the indi.) Once his tag end emerged on the far end of the indi, he pulled several more inches of mono thru the indi, turned the tip around, and threaded it back thru the indi, leaving a small loop of that mono hanging out of the far end of the indi, and the two tag ends of the 3X mono hanging out of the original, near end of the float.
"Thru that loop of mono, he threaded a long piece of rubber band to its midlength.  Then he grabbed the two distant, tag ends of mono and pulled them tight to "lasso" the middle of the rubber band with the mono loop on the other end of the indi.  He then pulled the two tag ends of mono to pull the loop of rubber band all the way thru the indicator.  Once the rubber loop came thru a bit (3/8 inch or so), he discarded his mono threader (put it in a trash container in the car).  He them trimmed off the two tag ends of the rubber band, hanging out of the distant end of the indi,  to about 3/8 inch. He now had a doubled-up piece of rubber band as his stopper thru the core of the indicator, which was already threaded onto the leader (step 1).  He gave the 3/8 inch protruding ends (tags and loop) of rubber band a twist or two to tighten and secure the indi to his leader at the depth he wanted it.
"He could easily untwist, slide the indi up or down his leader, and then retwist his rubber band stopper.  This rig made adjustment of the indicator along the length of his leader very quick and easy, with no kinks like those thimgamabobbers are notorious for, and no knots.  The indicator could not get tossed off the leader and lost, like slotted indicators do.  It's a great winter rig when an angler knows he's gonna indicator-fish all day!
"I learn something new from each angler that I say hello to in the parking lot or along a stream.  Fishing can be a communal sport.  It is one that leads many folks toward more fish and eventually  into  the conservation of their favorite trout waters.  Learn from seasoned anglers, teach the newbies, and participate in the conservation community that we are all a part of.  Pass it on."
Nanook
(Dredger)
Lee at 7:31 PM
Share